Lucky Luke mix 70s type folk rock á la Fairport Convention with a Velvet Underground approach to intensity to produce a sort of psycheCeltic folk, if you will. Calvin, on the other hand, are usually easier to describe, being a straight ahead no nonsense pop songwriting combo. Here, however, they choose to bleep out with an extraordinary array of noises adorning the main melody. And then, we have the simple pleasures of Terry, real name Ewan, (don't ask) with one of his simple but effective acoustic numbers. Obviously Belle and Sebastian/ballboy influenced, but don't mention Paul Simon.

Lee Patterson has a great gruff bluesy voice and spits out some rough, tough, gutsy music, along with no nonsense lyrics, e.g. "I sometimes think I'm wasting time but time is wasting me" (it sounds better sung, believe me). Otterley are kind of like a mixture of Idlewild meet Cocteau Twins with sunny Africanesque chiming guitars. No, really. It's a cool wee song this. Then Nobody Jones with a stomping little witty number containing the marvellously lewd sounding line, "I want to take you up the Pentland Hills". I'm in a rush and I cannae be arsed waxing lyrical, so here's a sublime slice of acoustica from Fionna Ross, a classy piece of funkery from Nick and Stuart and the incredibly unsubtle rockery of We Rock Like etc....

Some mellow swirling soundscapes from The Ocean Floor to start with and some pretty scary lyrics, eg. "you spill your guts, kick at your belly, kick and cry." Gulp. There's a lovely wee guitar motif running through the Buddhas track and a nifty pianah too. From the way this guy's singing you can tell he's wearing a hat. Rico, not the ska trombonist, is a tad gothicky and industrial but fetching nevertheless. There's also a bit in it reminiscent of the Osmonds' Crazy Horses weeeee sound. These critiques are brought to you courtesy of the Fat Boab School of Musical Appreciation.

From the Black Isle and apparently "melting down old school heavy metal riffs with psychedelic surf guitar, 70’s glam rock magic and new wave backwoods harmony" Raar aren't quite The Darkness but the way they sing "Red rivaaaa" makes me laugh. I don't know if you're supposed to, but... I saw Lynsey Hutchinson last night and she really is a classy act. Her obsession with the 19th century is...well... obsessive and here she sings the hangman's praises. Well, not praises, but...right I'll shut up now. Meanwhile, over at the Park Attack website they're "kicking no wave into the realms of fantasy". Well, they've clearly listened to far too much Pere Ubu (just like the Franz boys).

Fuzz and deep pounding a go go from the Bunny Boilers. It may sound like a million other things, but there is a certain naive charm about it. Then some perfect picking and smooth vocalising from one of the Edinburgh Sound Collective's persistently groovy performers in traditional singer/songwriter mode. Lastly, a breezy wee number from Glasgow's Cinematics, the title of which has absolutely nothing to do with the godlike genius of Mark E Smith and chums.

I saw Uncle John & Whitelock supporting The Fall the other week and mighty fine they were too, even though they occasionally sounded very Fallesque themselves at times, but then many do...and fail. This track, though has more than a hint of The Cramps about it. Which is no bad thing I suppose. Graeme Mearns is an amazing guitarist who makes it all look so effortless. An entertaining performer too. Here's one of his live tracks. Rounding off with some heavy riffing and shouting from Glaswegian exponents of car crash music, Macrocosmica, who include some refugees from Teenage Fanclub and Mogwai. I just love the laugh at the start of this Josephine track and how it fits in to the rhythm and the singer sounds like he's about to burst out laughing on the hook line too. Oh, and the music's pretty nifty too. And then...former Vera Cruisers Summer of Mars proving that that old heavy Wire sound can be blended with more traditional grunge riffage to produce, well, this sort of thing. And because we all love contrast, here's a lovely song from the gorgeous tonsils of Lindsay West - a regular on the Edinburgh acoustic scene.

A bit of bleeping and some galloping cowboy-like drumming from Luxury Car in this catchy wee number which bumps along amiably enough. And a lot of high drama generated by the strings in the menacing pop of this Driverdown track which just builds and twists and turns into something quite captivating. Then, a completely unique performer, Mr Colin Donati, with a stunningly simple and beautiful acoustic number. Colin's stuff is always different and always compelling. This wee ditty is a gem.

Many thanks to Mr N. Lamont for today's selections and blurb. I haven't seen Graystar live but Norman tells me he was knocked out at their musicianship when they all looked barely 13. This a splendiferous track from their CD single. Then, the legendary Jackie Leven from a live limited edition called 'Man Bleeds in Glasgow'. I saw his band Doll by Doll way way back and you couldn't help but be struck by his intensity. In 1970ish Mike Heron of the Incredible String Band abandoned folkish warblings and dark mysteries and made an album with lots of session people including John Cale (who plays viola on this track), Dudu Pukwana, Richard Thompson, Pete Townshend, Keith Moon and Ronnie Lane. This is the best Who track the Who never made! Oh, and by the way, if you're in the area, be sure to check out Edinburgh's latest supergroup, Whyte and Mackay, at Leith Market tomorrow noon. See Daily Reckless for details. Well, that wee free show by Sons & Daughters at HMV last night was excellent I must say. Cracking sound and good stage business from Adele and Scott, whose jerky actions reminded me of Joe Strummer in his heyday. So no apologies for featuring them two days in a row. This piece of song noir was the definite standout for me. Youse really have to get their LP The Repulsion Box. And then, something slick from Amplico, whose pikchur you're looking at there. Lovely voice, nice song. Lastly, a stripped down liddle bidda blues from acoustic maestro Scott Reilly.

Live from Out of the Bedroom in Edinburgh comes this sweet track from Gordon Mcintyre of Ballboy - a damn good group and a damn good solo performer also. Then something altogether more sombre from St Jude's Infirmary, framed by some soothing train noises. A real grower this one. Finally, Sons & Daughters have a new album out at the moment - The Repulsion Box and this is one of the stunning tracks on it. I'm a sucker for Scottish accents on record. They'll be playing a wee free set at HMV on Princes Street tonight at 5, so I'll definetely be heading over there.

Laidback sort of feel to today's selection. Dave MacGruer is a superb guitarist who often mucks in with the Edinburgh Sound Collective. He's now got a CD out with some cracking instrumentals on it which I urge you to find a copy of. Here's a belter from it. DeRosa describe themselves as "angular punk and post punk aggression met with the dreamlike stare of a twisted sense of melody and straightforward pop structure". So there. They're not sounding too angular here, though. More Talking Headsish I would say. It's that Franz effect again! Meanwhile, some lovely moothie and banjo weaves its way through this classy track from Eugene Kelly of BMX Bandits, The Vaselines and Eugenius fame.

A couple of oddities and a classy wee song today. Le Reno Amps burst forth with a funky wee Middle Eastern/Spaghetti Western vibe behind a tale of the wrath of a woman scorned. Great stuff. Then, find out what happens when Irvine Welsh meets Primal Scream in this mellow little workout. And from 1981, The Fire Engines in this rare (and reassuringly lo-fi) track from a John Peel session. Edit - They did it first, not Heaven 17 (Thanks Tom). Edit edit - naw they didnae. 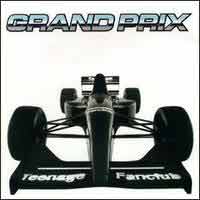 Tan ta raaaan - Huzzah for The Fannies and all who sail in her. Who could have doubted they'd be at the top of the tree? Well, they're as worthy winners as anyone. OK, they're not pushing at the bleeding edge of experimentalism or anything, but, damn, they know how to bung out a good chune and here's three of the finest from the best Scottish album ever (according to readers of Is This Music? anyway. I suppose youse know better though,eh? If you've any better suggestions and examples thereof, do let me know). My own favourite off this or any Fannies album is Verisimilitude. Pop perfection it is. Next week, we'll get back to the ragbag and many splendoured joy that is Scottish modern music.

Another surprise high placing for the legendary Bis, here with a live rendering of one of their pop punk classics with more than a smidgen of Rezillosesqueness about it. Then the even more legendary SAHB's epic Faith Healer. Goes on a bit, but, hey, it's the early 70s - they loved a bit of overblown theatrics then. And why not? At least it's not Prog Rock (spit). And at number two, the ubiquitous Franz who everybody's probably sick to death of by now, but still sound no bad. I hear they're trying to be more Dylanesque, lyric wise, on their forthcoming platter. Sounds interesting. Or not. Who knows. Still, number one tomorrow, kids. Bet you're all excited, eh? I have already waxed lyrical about the wondrous vocal capacities of the late great Billy Mackenzie so, suffice to say, here is the masterpiece that is Party Fears Two. Nuff said. R.I.P. At 6, and I've no idea how they got this high up, are the truly mediocre Peeps Into Fairyland. Am I missing something here or is this just drop dead dull? Moving right along, and with a deservedly high placing are the divine Dogs Die in Hot Cars. This really is a superb album and it was supremely difficult to pick one track from it, but I settled on the eclectic Paul Newman's Eyes which really has it all - singalong hooks, great backing oh, oh, ohs, reverb guitar, mad instrumental bits and a smart time change at the end. All in one handy song. Go buy the album - you'll love it.